What is used in glass production?

What is used in glass production?

Glass is a special substance, but what is used to make such an object?

Glass is one of the most revolutionary items to be produced by man. If we look around you now, we can guarantee that at least a handful of items in your room are using the material in one way or another. Your windows, smartphones, tablets, music players, TVs, fridges and more all use glass in one way or another, whether it’s protecting you from the rays of the sun and the harsh weather or if it’s keeping your food items cool, glass is a truly amazing thing. For something so amazing, just how is it made? We’re going to look into how glass is produced, and more, in our latest blog.

Most glass is made from a mixture of substances, with a large amount of silica being used to make the material. This is then combined with small amounts of alkali’s, which is most commonly soda (sodium bicarbonate), which allows the substance to have a lower melting point, with added limestone to help stabilise the mixture, therefore making the glass stronger and way more water-resistant. These elements are found in our nature, so they’re widespread throughout the world. 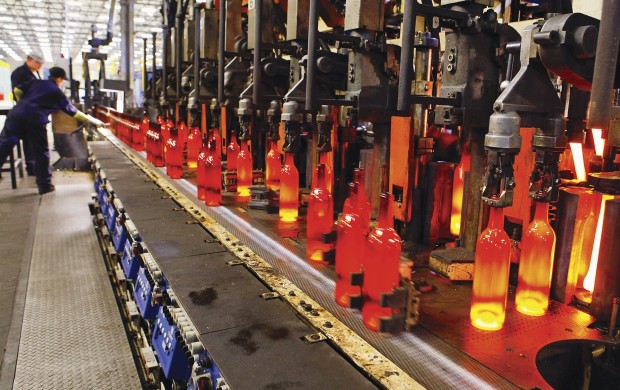 A range of glass bottles in production

These three items (silica, soda and limestone) are all fused together at an extremely high temperature, with the heat allowing them to combine. Through this process, other substances can be added, which will allow the properties of the glass to be altered in a number of ways, including its colour, it’s level of reflectivity, how sparkling the glass appears and even how well it acts as an insulator to cold and heat. Old, broken glass is often added in during this process, allowing a recycle element to be used during the production. Adding broken glass to the mixture from previous manufacturing is called ‘cullet’.

Pressed glass is one of the most widespread uses of glass in the modern day. It was the first version of glass that was manufactured on a large scale during the 1920s, as this was the time in which the glass-pressing machine was first invented. The machine would take molten glass from a furnace and divided it up into smaller sections. A plunger would then press the glass down into a mold and after only a few seconds it would be ready.

Glass is often categorised by its composition. The most common glass is ‘soda glass’, the combination of the three elements silica, soda and limestone. Though it’s the cheapest type of glass to produce, it’s coincidentally has the least resistance to high temperatures, or even sudden changes in temperature.

For better levels of resistance to temperature changes, most expensive versions of glass are used, like borosilicate glass for example. A minimum of 5% boric oxide is used, and this type of glass is used to make light bulbs, car headlights, bakeware and more.

As we said previously, coloured glass is made by adding various chemicals into the mix when it is being prepared. Particular chemicals will create different colour effects on the glass, depending on the chemical in question. For example, the amber/brown colour of glass often used in beer bottles gets its colour from iron sulphide.

For more on glass and glass manufacture, please visit our website.

GlassGlass manufacturers
Share
What’s the process of glass production? Next

No posts were found.